Elvis Aaron Presley was born on January 8, 1935 in Tupelo, Mississippi. He died aged 42 on August 16, 1977 but during his short life and since his death he has become one of the most well known cultural icons of modern times.

Pictured: Elvis PEZ dispensers depict iconic images from three periods of his career and are packaged in a collectible tin.

His impact on modern music is such that is often referred to as “The King of Rock ‘n’ Roll”, or simply “The King”.

Presley began his career as one of the first performers of rockabilly, an uptempo fusion of country and rhythm and blues with a strong back beat. His novel versions of existing songs, mixing “black” and “white” sounds, made him popular—and controversial—as did his uninhibited stage and television performances.

Pictured: Classic picture of Elvis Presley which is also available as a poster.

He recorded songs in the rock and roll genre, with tracks like “Hound Dog” and “Jailhouse Rock” later embodying the style. Presley had a versatile voice and had unusually wide success encompassing other genres, including gospel, blues, ballads and pop. To date, he is the only performer to have been inducted into four music halls of fame.

On January 27, 1956 Elvis Presley’s first RCA single ‘Heartbreak Hotel’ was released. This hit number one by April selling one million copies. Elvis went on to have five number ones that year alone. Elvis had become a phenomenon. From the very outset merchandise was important and Elvis Presley Enterprizes Incorporated was established to create everything from clothing to jewelry and from dolls to games. By the end of 1956 the Elvis Presley Enterprizes Incorporated alone had grossed between $20 and $25 million. 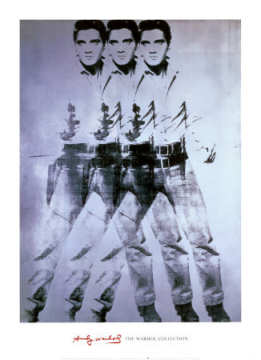 Pictured: Poster of the picture Triple Elvis by Andy Warhol. The original picture was produced in 1963.

Elvis continued to dominate the music charts in the both the US and UK in the late 50s and early 60s with a string of hits and successful concerts. As well as singing, Elvis turned his attention to acting and he made thirty-three movies mainly during the 1960s By mid 1968 Elvis’s music career was by his standards floundering but with a telecast at Christmas 1968, later dubbed the ’68 Comeback Special’ he returned to live music with rave reviews.Rolling Stone called it “a performance of emotional grandeur and historical resonance.” The show featured lavishly staged productions, but also saw Elvis clad in black leather, performing live in an uninhibited style reminiscent of his rock and roll days.

Buoyed by the experience, Presley engaged in the prolific series of recording sessions at American Studios, which lead to the acclaimed From Elvis in Memphis. It was followed by From Memphis To Vegas/From Vegas To Memphis, a double-album. The same sessions lead to the hit singles “In the Ghetto”, “Suspicious Minds”, “Kentucky Rain” and “Don’t Cry Daddy”. In 1969, Presley made record-breaking appearances in Las Vegas. He then toured across the U.S. up to his death, with many of the 1,145 concerts setting venue attendance records.

For collectors there is a huge legacy of material to seek and thanks to Elvis Presley Enterprizes who continue to license the Elvis name and image there is a constant stream of new memorabilia. 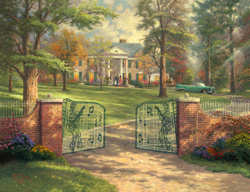 Elvis’s home Graceland has become the second most visited house in the US, after the White House and continues to attract hundred of thousands of visitors each year. Whilst the demand remains companies will continue to create collectibles.

Pictured: Thomas Kinkade painting of Graceland marking the 50th Anniversary of the purchase by Elvis Presley.

Pictured: Elvis ‘That’s All Right’ record on the Sun label.

With the advent of the Internet access to items is easier than ever, but always remember ‘Caveat emptor’. A simple ‘Elvis‘ search on ebay will normally return over 8,000 items ranging from original clothing to figurines and from music boxes to records.