The market for rock and pop memorabilia is maturing fast despite the fact that pre-1980 there was no real market of note. Today, personal items, lyrics and instruments associated with the Beatles, Hendrix, Rolling Stones and Elvis are considered the creme de la creme of rock and pop collectables. Buyers are increasing in numbers, supply of good material is drying up and prices are rising across the board.

Some interesting facts and auction results

Beatles memorabilia is the bulk of the market with prices for signed material rising A set of autographs in an average plain autograph book are worth about £700, a signed Fab Four photo from the early days around £800-£1,200, programmes and record sleeves that are in very good condition and signed by all four £1,500-£2,000.

When the Hard Rock Cafe first entered the market, many of the top prices paid by the restaurant chain were the result of HRC’s across the world bidding AGAINST each other for item! Today, HRC has a central buyer for all the group’s outlets so they no longer bid against each other

Oasis collectables were very hot a few years ago, but given that the band’s profile is not as high as it was expe rts say it remains to be seen whether or not this will become a classic Rock and Pop Collectable.

It’s generally thought that the reason for the dramatic rise in pop memorabilia prices and poster prices is because many new collectors want items that remind them of their childhood, favourite group etc and would prefer to pay top money for an item that means something to them. As a result items like 18th century porcelain, religious paintings and some other traditional areas of antiques are failing to really achieve prices that reflect their real value – simply because these items do not connect with today’s buyers.

Provenance is essential – all auction houses check out the proveance of items and if it turns out that the piece is not as described you are entitled to get your money back. Avoid dealers making ambitious claims about items and their proveance unless they have some authentic documentation to back it up 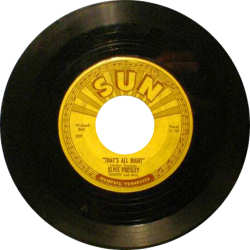 Experts’ wish list of items to find are usually headed up with the Jimi Hendrix Flying V Gibson Psychadelic Guitar painted by Hendrix himself. It’s known to exist and there are photos of Hendrix with this, but it has never turned up at auction and to date no one knows where it is in the world. Most say this could reach £250,000-£500,000 if it ever did come onto the open market.

Pictured left: Elvis ‘That’s All Right’ record on the Sun label from 1954.

Even items belonging to members of the groups that played with the famous are rising in value. In April 2000 a collection of guitars was sold by Christie’s in the States and included one played by Scotty Moore who was with Elvis Presley’s band – it made £67,550

Geri Halliwell’s Union Jack dress sold for £41,320 but has now been immortalised by The Latest Thing, part of Collectible World Studios – it’s resin version designed by Stacey Bayne costs £15 in most gift shops