Early puppets included Sandy McBoozle (Scotsman), Cowboy, Cowgirl, Witch, Lulabelle (hula girl), Ice-Skater and Clown. Originally the puppets had their wooden heads turned on a lathe, but after visiting a fairground in 1948, Bob secured a supply of the wooden balls used for coconut shies, and so often these were used for the heads of puppets. 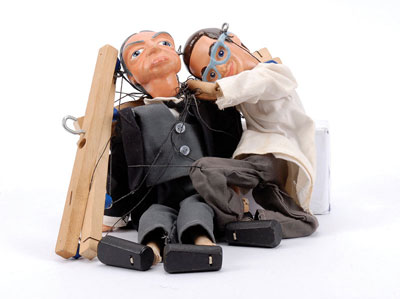 Some of the more popular designs were in production for decades, so collectors date them by various means – joint style, head shape, string colour. One of the delights of collecting Pelham Puppets is that because many of the characters are favourites from children’s television, comics and books, it is possible to relive your childhood.

Early television-related puppets include Mr. Turnip, Hank, Bengo, Andy Pandy, Muffin the Mule, Bleep, Booster and Torchy. Lettice Leefe (the greenest girl in the school), a favourite bespectacled schoolgirl in a gym-slip character from Girl comic, appeared in 1953, but is rare to find nowadays. In the early fifties, Bob acquired the rights which allowed him to produce Walt Disney puppets; Snow White, Pinocchio, Cinderella, Donald Duck and Minnie Mouse were amongst those which appeared. He even made all seven of the Snow White Dwarfs.

As puppets have strings which tend to tangle, children often used to replace them in the boxes after use, as opposed to the boxes of dolls and other toys which were normally quickly discarded. This means that collectors have a good chance of finding boxed items. Puppets can be dated form the boxes – assuming, of course, that the original owner replaced them correctly. 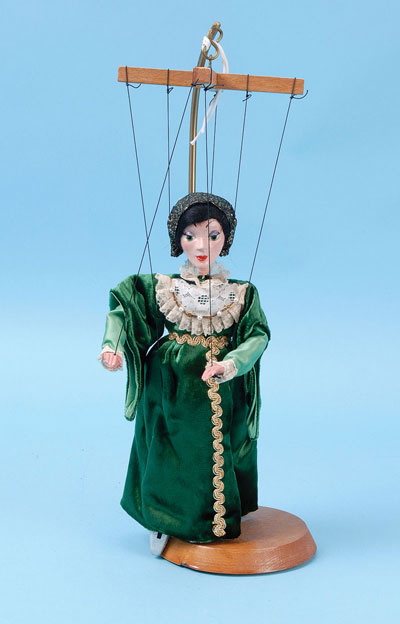 Brown boxes with a dark blue and white label (or other colours) date from the fifties. In the sixties the boxes were yellow and adorned with pictures of various puppets from the range. By the end of that decade, the boxes had cellophane fronts so that the puppet could be seen inside. Yellow cello-fronted boxes continued throughout the seventies, reinforced with a band of card across the front. The late eighties saw a change to red and yellow striped boxes.

Collectors usually prefer the puppets to be in good condition, with not many chips. Strings should be untangled. Generally, as with most collectables, the older puppets are more desirable.

However, some of the later puppets are rare, as not so many were made, and there are also ‘specials’ which were produced over the years. Really rare puppets are becoming more and more valuable; a 1940’s clown wearing a camouflage suit made £1,350 at auction a few years ago. 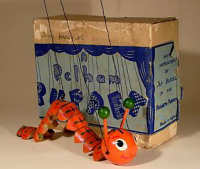 Pictured right: Pelham Orange LB Caterpillar, An early example of Caterpillar, Pelham Puppets LTD around 1947/48. Difficult to find this puppet in good condition with the early blue-label box and control with blue label in tact. The puppet is mostly found in the green colourway but it is possible with luck to find it in red and as here, rich orange.He is made almost entirely from wooden blocks with a round ball for the head and dowel and beads for the antenna. The end of the tail is painted lead.

The painting design on the segments varies enormously with each example of the puppet. He has some minor wear under the chin and slight chipping to paint on the lead segment but overall in excellent condition. The puppet is approximately 9 inches long.The puppet comes on a fixed T-bar control with the early blue label sticker saying ‘Pelham Puppet’. The black stringing is original and untangled. He is correctly boxed with some original tissue. The box itself shows a little wear and rubbing on the lid but no splitting. A desirable and scarce character for the serious collector of Pelham Puppets. Sold for £277, Ebay, May, 2009 Image Copyright Paul Coleman.

The excellent book by David Leech, ‘Collecting Pelham Puppets’, includes Bob’s description of ‘how it all began’, where he describes how he used large wooden toggles for puppets’ boots, partitions from ammunition boxes for bodies, the end plywood panels of the boxes for the control strips, and flexible rubber gasmask hoses to form legs on large display puppets.