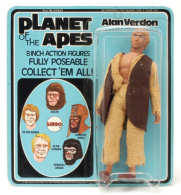 Starting in 1971, Under the direction of David Abram’s son Martin, Mego began purchasing license rights to a variety of successful motion pictures, television programs, and comic books, and started producing lines for Planet of the Apes, Star Trek, and the Wizard of Oz. Mego used various licensed Marvel and D.C. superhero characters to create their World’s Greatest Superhero line, which became their most successful toy line. They also produced an original character, Action Jackson, an unsuccessful competitor of Hasbro’s G.I. Joe.

The secret of Mego’s success was that their action figures were constructed with interchangeable heads. Generic bodies could be mass produced and different figures created by interposing different heads and costumes on them. Mego also constructed their figures primarily in an 8-inch (200 mm) scale – setting an industry standard in the 1970s.

In 1972, The Mego made a landmark deal and secured the licenses to create toys for both National Periodical Publications (later DC Comics) and Marvel Comics. During this time period, Mego released the very first ever comprehensive line of DC and Marvel character action figures and coined the term “World’s Greatest Super Heroes!” to umbrella the name for all the figures released in this line. (They later relinquished their rights and surrendered the trademarked name to both DC and Marvel Comics in order to maintain licensing privileges. In turn they were granted licensing rights to the name). The popularity of this line of 8″ figures created the standard scale for the 1970s and featured several popular superhero and villain figures. The earliest Batman and Robin figures had removable masks but they were easily lost and Mego noted that it was less expensive to create a new sculpt for Batman with a molded on mask and simply painted the mask onto Robin. Mego was a true pioneer in action figure development. They were offered for an entire decade from 1972 until 1983.

Earliest figures were released in a solid box but the boxes were damaged in stores by shoppers who wanted to see the figure inside. The design was quickly changed to a window style box. To start the line, Mego introduced Batman, Robin, Aquaman and Superman. But others soon followed.

Mego also created the first carded packaging for action figures. Initially, Mego figures were released in boxes but S.S. Kresge’s did not have shelves on which to place them so they requested that something be designed for their “peg board” displays. To satisfy the need, Mego created a card which is referred to as a Kresge style card (named for the Kresge — later Kmart) store chain. Although later carded figures followed, this particular early style of card placed the clear plastic bubble containing the action figure in the center of the card and is notably different than later cards, which placed the bubble toward one side.

In 1974, Mego offered the first exclusive figures for Montgomery Ward’s due to a relationship founder David Abrams had with Wards, which included Bruce Wayne, Dick Grayson, Clark Kent and Peter Parker. These figures are now among the rarest of Superhero action figures. The figures feature the same heads as the corresponding superhero egos that Mego produced but because the run on these figures was separate from that of the hero figures, there is a bit of a color shift on the heads of several known examples that is unique to the SI figures themselves, distinguishing them from the superhero figure. The heads are known to exist with or without copyright information imprinted on the back of the neck.

1976 Nubia doll from the Wonder Woman seriesMego first attempted a fashion doll line in the early ’70s to rival Barbie with Maddie Mod, who had an extensive wardrobe, and her boyfriend Richie. The line was not a success. They also created a poseable eight inch (203 mm) scale of a Barbie-like doll, 1973’s Dinah-Mite.

From 1976-1980 they produced a popular line of lucite 3″ fully articulated figures called Micronauts to compete with Kenner’s Star Wars line. The Micronauts line was licensed from Japanese toy maker Takara, and based on that company’s Microman line of toys.

Mego added 12 1/2 figures from the Superman movie in 1978, as well as the members of the rock ‘n’ roll band Kiss. A specially molded doll head of Gene Simmons was made to show the tongue sticking out.

A small collection of military-themed action figures were also released in the early 1980s, called “Johnny Action or Combat Man” in the US, they were also marketed in other countries (France, Italy, Germany, Australia, United Kingdom) released in 1976 under different names. Using the same 6-inch (150 mm) format, they were produced after the 12-inch (300 mm) G.I. Joe figures had lost their popularity and before the revival of the G.I. Joe line in 3-3/4″ format and also to compete with Spain’s Madelman line of soldier figures. The 6-inch (150 mm) combat line was not a success, and knockoff fig ures were also released for companies like Woolworth’s (or Woolco in Canada, where the line was known as “World War Two Heroes, Brave Soldiers, Jest Force”).

Eagle Force was a two and three quarter inch high die-cast action figure toy line marketed by Mego Corporation in the 1980s in the United States, the line was similar to the G.I. Joe action fugures by Hasbro. They were designed by Paul Kirchner.

In 1976, David Abrams rejected a deal to license toys for the upcoming motion picture Star Wars. This decision was of little consequence to Mego, although the movie was extremely popular and competitor Kenner Products sold substantial numbers of Star Wars action figures.

Following Star Wars’ great success, Mego negotiated the licenses for the manufacturing rights to any and all potentially successful science fiction motion picture and television shows, in hopes of finding a similar hot property. They produced 12-1/2 inch figures for Moonraker, Buck Rogers in the 25th Century, The Black Hole, Star Trek: The Motion Picture. None of these were as successful as Kenner’s Star Wars products, although they were of much higher quality than Kenner’s unsuccessful 12″ figures.

In 1982 Mego filed for bankruptcy, and by 1983, the Mego Corporation ceased to exist.

Today, Mego action figures and playsets are highly-prized collectibles, with some fetching thousands of dollars on the open collectibles market. The World’s Greatest Superhero line, The Elastic Superheroes line (a MINT Elastic Batman figure actually sold for over 15,000.00 in 2006), the Wonder Woman doll line, the Cher doll (as well as certain rare Bob Mackie designed outfits), and the Kiss dolls are deemed as prized collectibles.

In recent years, Mego’s 8-inch (200 mm) figures, particularly the superhero line, have found new life in “Twisted ToyFare Theater,” a humorous photo comic-strip appearing in ToyFare: The Toy Magazine. ToyFare staff pose and take photos depicting the figures in bizarre situations, with added dialogue bubbles. The series is well-known in comic book and collectors’ circles for its distinctive, off-the-wall sense of humor. The strips (renamed, formerly “Twisted Mego Theatre”) have even been printed separately in their own collection.

In 2001, good quality reproductions of Mego bodies, heads, and accessories were made in China by Dr. Mego. Collectors could now repair their broken or incomplete Megos as well as make new custom action figures.

In 2005, a company named ClassicTVToys (CTVT) began to produce lesser quality 8-inch (200 mm) re-issue figures very similar in design to the original Mego figure. Various lines manufactured include facsimilied replicas of Mego’s Mad Monster, Merry Men, Western Heroes and Super Pirates. These figures were produced in India and were made from a low quality recycled plastic, which caused the figures’ hands and feet to crack and break easily. The accessories work well as replacement accessories for original Mego items that are missing parts, however, to the company’s credit, they are usually marked “CTVT” and the lack of quality is quite evident as being easily spotted as a repr oduced part. See Megomuseum.com/accessory check[2] for details of how to spot a reproduction.

They also manufactured licensed, classic television characters, packaged on blister cards. Among the many included in the line: Happy Days , a modified version of the series Mego made. And others, which Mego did not make, such as Married… with Children, The Munsters, The Brady Bunch, and professional wrestler André the Giant. Unfortunately the sculpting of the heads were harsh and lacked Mego’s charm. These figures were quickly discounted by CTVT and can be found for 1/3 of their original retail price on ebay. Please beware of reproductions or original items bearing reproduction accessories. This will always be disclosed by an ethical reputable dealer and can be easily identified with some education in the matter.

In 2006, EMCE Toys brand (pronounced “MC”) was founded by Paul “Dr. Mego” Clarke and Joe Sena to bring back Mego toys with the blessing of Marty Abrams – former CEO of Mego Corp. Made in China, the new Star Trek figures have the high quality of the Dr. Mego parts, matching the original action figures. Working with Diamond Select Toys – holders of the Star Trek and Planet of the Apes licenses, these figures have been selling in comics shops and quickly selling out. Following their success, new characters are currently being produced that Mego did not originally make such as Lt. Sulu, Ensign Chekov, and “Space Seed” villain Khan.

The Gorn that Mego produced was a brown lizard head on a brown body wearing a Klingon outfit. Fans have frequently wished that Mego had made a TV accurate Gorn. EMCE Toys and DST are making a new green Gorn based on the TV episode “Arena”.

EMCE Toys was even able to get original Mego packaging artist Harold Schull to illustrate new artwork for Sulu, Chekov, Khan and the Gorn.

Mego collectors have an annual buy/sell trade convention in Wheeling, West Virginia called *Mego Meet this occurs the first weekend in June. This event is open to the public. Anyone interested in obtaining these true landmark original early action figures as well as the recent incarnations and accessory parts are encouraged to attend. Expert panels are also provided for several educational topics.

In early 2009, co-founder Martin Abrams announced that he has reclaimed rights to the name Mego. No specific future plans for Mego Corporation have been disclosed to date.

Copyright (C) 2000,2001,2002 Free Software Foundation, Inc. 51 Franklin St, Fifth Floor, Boston, MA 02110-1301 USA Everyone is permitted to copy and distribute verbatim copies of this license document, but changing it is not allowed.