In 1980 Hantel produced their first jointed miniatures. Most of these models were
characters from 19th century literature. In the same year the company moved to
Scotland, and since then have continued to produce models there. 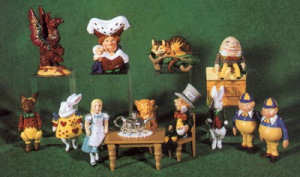 In June 1999 Hantel
Ltd were taken over by Mr Patrick Mansfield of Tower Enterprises Ltd, who for the last
twelve years had been their agent in Japan. The Hantel name was retired in 2007.

The idea for the miniatures came from the popularity of doll houses and their
interiors, and the idea of having movement within the figures was triggered by
an antique jointed porcelain doll. By adding colour, Frances Wilson had developed
a very individual collectable.

After some success with small nursery toys and dolls house products, Frances
Wilson began designing a range of figures, drawing her inspiration from
childrens literature and nursery rhymes such as Alice in Wonderland, Cinderella,
Hey Diddle Diddle, The Owl & Pussycat, Mother Goose and Punch & Judy.
Other ranges have included the Butterfly Ball Collection,
Santa & his Sleigh and a large selection of Teddy Bears.

Hantel have also produced miniatures
for Steiff and in the past a superb range for Disney.

The figures have become very popular and the company has grown on the uniqueness
and quality of its miniatures.
Although the company still produces only a small volume
compared to some other collectables.

The Hantel Collectors Society was established in 1992. Each year members received
a gift miniature and the option of purchasing models available to Society members only. The Society ended in 2007.