Although the British Denys Fisher company was only active in the doll world for ten years or so, it gained a reputation for quality with attractive and innovative dolls. The owner, Denys Fisher, became a household name practically overnight, creating a storm with an invention called Spirograph. According to accounts, he was an electronics engineer researching a new design of munitions fuse for NATO, and came up with the idea of sets of gears which could be used as drawing aids. These gears enabled children to produce complex patterns and spectacular artworks, which could be carefully coloured in, teaching hand co-ordination, colour co-ordination and a sense of design. It is unsurprising that Spirograph was voted Toy of the Year in 1967, and is still popular today, though now produced by Hasbro. 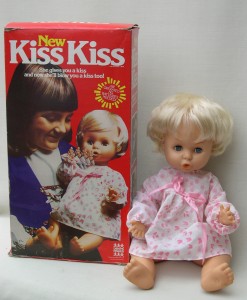 Therefore, the Denys Fisher Toy Company came about almost by accident, and though the company ceased trading over twenty years ago, collectors still talk nostalgically of its products. The company first entered the world of dolls in 1968 after they took over Wendy Boston Playsafe Toys, a concern especially famed for its all-in-one machine-washable teddy bears. They introduced a range of cuddly dolls made from brushed nylon with fur-fabric hair, round plastic eyes and cute little button noses. Soon after, Denys Fisher became part of the General Mills U.K.Toy Group, alongside Chad Valley and Palitoy, though they were able keep their own identity, and didn’t need to conform to a ‘house style’.

One classic was Baby Needs You, a 17″ battery-operated toddler introduced in 1976. She was blonde with attractive blue eyes, and featured unusual ginger-brown eyebrows. Baby Needs You was clearly marked ‘Denys Fisher Toys Ltd’, and featured a clever crying mechanism which, once switched on, caused her to wail until she was picked up. Then, by magic, she stopped. Her distinctive, delightfully moulded hands had the fingers of the right hand curled into a fist. Those of her left hand were slightly more extended, with the thumb and index finger almost touching. A couple of years later, another 17” doll, Baby Kiss Kiss, came along, with similar hand modelling. This one, though, didn’t need batteries, she worked by air-pressure, and a squeeze of her leg caused the doll to kiss her young owner – though it was really more of a powerful suck! She could blow kisses, too. In 1977, this doll was reissued with a different hand moulding. These dolls tend to come up for sale quite regularly on the internet and at doll fairs, but only sell for a few pounds, unless, of course, they are boxed and complete.

Air pressure was also used to operate Sleepy Sue, a sweet 12” high baby with vinyl limbs and a soft body. Sue could lull herself to sleep, sucking her thumb, if she was seated, and then pulled into an upright position. Wearing a spotted blue nylon dress, she was clearly marked with the Denys Fisher name, plus the date, 1974. If you come across a rather strange-looking doll fitted with a plastic key, wearing a moulded-on hat, it’s odds on it’s a Swimming Sue. Originally she also wore a multi-coloured striped swimming cossie. The trouble was, she had limited play value. When wound, her mechanism caused her arms to whirl madly and propel her through water, so, although fun in the bath, you couldn’t really do much with a doll whose arms were permanently in the air. Still, she could swim back stroke or back butterfly stroke, just by adjusting her arms. By contrast, Talkin’ Trixy, a 21” walker was a record doll operated by push button, with plenty to say for herself, and had much more play value. 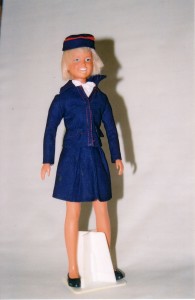 Wanda, a girl doll, with blonde hair and sturdy legs, was unusual. She carried a ‘magic wand’, which was activated by rubbing it against a suitable fabric to create a build-up of static, and the simple process caused her to walk. This pretty doll was dressed in a pink gingham frock with an apron over the top and her long wand was tipped with a star. A sweet baby doll, Rockabye baby, issued in 1974, packaged with a pink plastic crib and advertised as, ‘’The doll with the rock-a-bye eyes’, also had a clever mechanism. Just 11” tall, with short blonde hair, blue eyes and a lace-trimmed pink nightie, when placed in the crib and rocked, her eyes slowly closed, just like a baby drifting off to sleep. A similar, smaller doll, My Baby, was also sold with a crib, this time made from sturdy cardboard. My Baby had brown curly hair, sleeping eyes and could hold her own rattle which she shook as the crib was rocked. Probably the smallest dolls made by Denys Fisher were Fingerdings, little finger-puppet type creations which walked and danced when fingers were inserted into their legs. Designs included a majorette, ballerina and ice skater.

Amongst the other small dolls was ‘My Best School Friend’ Jennie, who stood 7” high and had short, straight blonde hair with a fringe. Jennie, dressed as a schoolgirl, wore a grey pleated skirt with straps, white blouse, red tie and smart red school hat. A smart red school blazer could be obtained by saving tokens on packets and boxes from Jennie accessories, which included a camping set, bicycle, piano, bed, classroom set and even a house, made from stout cardboard. Outfits were available, too – Jennie had a Brownie uniform, red velvet dress and a dungarees set.

However, the most popular Denys Fisher small doll was, without doubt, Little Sweet April. Still very collectable, this 5” high cutie was made under licence from Miner Industries and marked ‘Remco’. Sturdy, perfect for tiny hands, she cried real tears, and was very pretty. If you pressed a button in her back she raised her arms, and she could even walk, with a bit of help. Though she was small, she came with an impressive range of accessories and outfits. Little Sweet April was sold seated on a swing in a clear plastic pack wearing a green or turquoise romper suit with a matching bonnet. This suit incorporated a white plastic bib featuring a logo of a doll’s face with a teardrop. Recently, mint, still-in-swing doll plastic-packaged dolls have been selling for around the £50 mark, which works out at £10 per inch!

The doll’s tear mechanism was activated by giving water to the doll from her bottle, then pressing the pump button on her back. Amongst the accessories available were a pushchair, rocking horse, high chair, bath and dressing table, whilst clothes included a bathrobe, nightie, dresses, pants, tops and dungarees. By collecting packet tokens, you could send away for a free carry-case wardrobe.

As Little Sweet April was so successful, she soon acquired a big sister, 13” tall, confusingly named Big Baby Sweet April. This larger version is not quite so easy to find today but she is worth looking for, as she featured the most stunning sapphire-blue eyes. Her short hair was pale blonde and she wore an apple green romper with an attached plastic bib bearing a logo, similar to that of Little Sweet April. Big Baby Sweet April’s green bonnet was trimmed with white lace and she had her own white plastic feeding bottle. She functioned just like her baby sister; she could cry, wet and walk, and she featured the same push-button mechanism in her back which caused her to raise her hands.

Teen dolls also featured in the Company’s range, including Dusty, a 12″ tall with a wide smile and freckled face. Very much into sports, she could be obtained in various guises such as a swimmer, golfer, tennis player or volleyball fanatic. To appeal to fashion doll lovers, she was also sold in the guise of an air stewardess with a range of costumes suitable for other lands, though her tomboyish looks were rather against her. Another teen was the slightly scary Bionic Woman, whose skin on her right arm and flaps on her thighs could be peeled back to reveal the robotic-type modules. Bionic Woman, 12”, was dressed in a blue jump-suit, and came with a mission purse containing all kinds of goodies. Many other outfits were available.

Also television-based were Angels, a series of delightful 9.5″ dolls representing nurses from St Angela’s Hospital, from a hospital tv series. The dolls wore traditional nurses’ uniform, and hospital ward accessories enabled incidents from the series to be re-enacted. Denys Fisher dolls were very innovative, and make interesting additions to a 1970s collection.