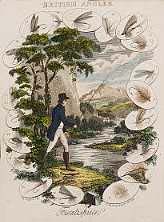 Bonhams
presents the Angling Library of John Simpson, described by Classic
Angling as “the sale of the decade”, in a two-part
sale, taking place on 15 February and 2 June 2005 at the New
Bond Street galleries. This collection is believed by many to
be the most important of its kind for at least 30 years, carefully
compiled by John Simpson whose discerning eye for quality, condition
and comprehensiveness is reflected throughout.

For anglers who aspire to have a library of note on the subject,
this sale provides a rare opportunity to collect books ranging
from the 17th century to the 20th century Honey Dun Press, of
which John Simpson was a director. Standard works of angling
literature are found in numerous variant editions and issues,
presentation copies and authors’ own copies, many beautifully
presented in elegant cases by Aquarius.

Among the highlights of this sale are:

A copy of W.H. Aldam’s Quaint Treatise on “Flees”
with a signed photograph of the author, inscribed by the editors
to Mary Ogden Smith who tied the majority of the 25 specimen
flies mounted in the book (estimate: £1,500 – 2,000).

The unique copy of a facsimile of Thomas Barker’s Delight,
or, the Art of Angling printed on vellum in 1820, with an auction
history and provenance stretching back to Alfred Denison, the
nineteenth-century fishing book collector(estimate: £1,500
– 2,000).

Several copies of Blacker’s Art of Angling, some signed
by the author and with flies mounted with attractive paper seals
– a method that anticipated the sumptuous volumes produced
by Aldam some thirty years later (estimates around £1,500
– 2,000).

A copy of The Angler’s Vade Mecum by James Chetham with
an ink sketch and manuscript poem dating from 1707, by William
Ellay of Thirsk, including the couplet “Now happy fisherman
now twitch ye line / How thy rod bends: behold ye prize is thine!”
(Estimate: £1,500-2,000).

Joseph Crawhall’s autograph manuscript of The Compleatest
Angling Booke That Ever Was Writ interleaved with the printed
text, and with several letters relating to the author; this
copy is inscribed to Crawhall’s wife Margaret on her birthday,
in 1859 (estimate: £4,000 – 6,000).

One of 100 de luxe copies of Frederic M. Halford’s autobiography,
signed by the author; the collection includes archives relating
to the publishing of Halford’s works, and copies inscribed
by him to noted figures in this history of angling such as G.E.M.
Skues, T. Hawksley, John Henderson and others. Estimate: £1,500
– 2,000

George M.L. La Branche’s The Dry Fly and Fast Water, inscribed
by the author to Arthur Gilbey, a Committee Member of the Fly
Fishers’ Club (estimate: £100 – 150).

A copy of Edward Ringwood Hewitt’s Telling on the Trout
inscribed to G.E.M. Skues, pleading, “next time you must
fish with me and show me why I do not get more fish in hard
places.” (estimate: £100 – 150).

Alongside proof copies and books distinguished by their fine
provenances are more ephemeral items such as fishing broadsides,
trade cards, catalogues and manuscript fly books.

“
The `Black Tulip’ of Angling literature – ‘The
Fly Fisher’s Legacy’ – by George Scotcher, published
in 1810.This copy of the first edition, once in the library
of Eric Taverner, will be offered complete with hand coloured
frontispiece, maroon cloth and preserved in a calf-backed solander
box in the February sale.

The Fly Fisher’s Legacy is one of the rarest books in angling
literature; so rare that neither the Library of the British
Museum, nor the National Libraries of Scotland or Wales have
one. It is an important book for several reasons, not the least
being that it was the first angling book to contain a coloured
plate illustrating some of the insects imitated by anglers.
It was the first angling book devoted entirely fly-fishing and
certainly one of the first to mention the use of stiffer rods
and tapered lines…", wrote Jack Heddon in `Scotcher Notes’
in 1975.

Another stunning book being offered is a de luxe copy of Leonard
West’s ‘The Natural Trout Fly and its Imitation’,
published in 1912. This was limited to about 30 sets each containing
examples of 108 real trout flies in 9 sunken mounts. However,
this particular copy also has an additional four sunk mounts
showing hackles, feathers and hooks. As far as is known there
may have been no more than three copies like this: West’s
own; one given to his friend J. Unsworth; a third may have been
presented to King George V. Covered in black morocco gilt and
preserved in a morocco-backed solander box, this early ‘interactive’
also contains a portrait of the author signed ‘Yours truly,
Leonard West’

A fine copy of the first, and best, British book on angling
in Norway written in the 1800s is a scarce work – but collectors
will be happy to know one is being offered alongside these notable
angling books. Issued at the instigation of J.Jones, a tackle
dealer of Jermyn Street who also wrote the introduction, it
includes very fine hand-coloured plates of flies by J. and H.
Adlard.