The first World Cup was in 1930 and if you are looking for memorabilia from then or even the subsequent World Cups up to 1966 you will find posters, autographs and programmes, but not much else. We can blame 1966 and World Cup Willie for the era of collectable memorabilia.

Reg Hoye was a well respected artist having considerable experience and had illustrated some of Enid Blyton’s childrens books. Willie was one of four designs created, one was a boy and three were based on Lions. The design finally selected was of course Willie, with his looked based on Reg Hoye’s son Leo.

Willie was a massive success and was popular not only in the UK, but throughout the world. There was special interest in the character in Germany and Russia. Willie found himself on everything from mugs to bedspreasd, money boxes to posters and from tankards  to plates. There was a huge merchandise boom based on Willie and the 1966 World Cup.

Another first for 1966 was the World Cup song which was aptly name ‘World Cup Willie’ and was sung by the skiffle king Lonnie Donegan. The song was re-released for the 2010 World Cup by Lonnie Donegan Jnr. 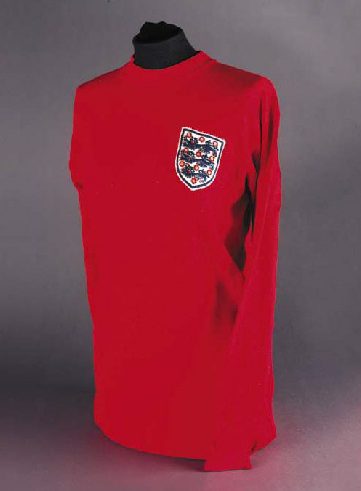 England who started the 1966 competition as one of the favourites, due to the fact that the tournament was held on home soil, began their group qualifying games with a 0-0 draw against Uruguay. In the two remaining group qualifying matches England defeated Mexico and France 2-0 in both games. In the quarter-final match against Argentina, Geoff Hurst scored the only goal of an explosive match thirteen minutes from the end. England’s opponents in the semi-final were Portugal who had the wonderfully gifted Eusebio in their side. In a very entertaining match, England were worthy 2-1 winners with both goals being scored by Bobby Charlton.

In the other semi-final, West Germany disposed of the U.S.S.R. national team by the same score and this set up a final match of the tournament between two of football’s oldest rivals at Wembley on 30th July 1966.

Before a crowd of just under 100,000, Haller scored for West Germany in the thirteenth minute, but six minutes later Geoff Hurst scored his country’s equaliser. For the best part of the next hour, neither side dominated the match but with twelve minutes remaining Geoff Hurst had an optimistic shot at goal which spun in the air for Martin Peters to knock home for what appeared to be the decisive winning goal. However, with seconds remaining, a hotly disputed free-kick from West Germany found its way across England goal and Weber knocked the ball into the net for a dramatic equaliser which took the match into extra-time.

After ten minutes of extra-time, England scored their third and without doubt the most controversial goal that has featured in any football match, never mind a World Cup final. Alan Ball chased a long ball towards the corner flag and pulled it back for Geoff Hurst, who shot from the edge of the six-yard box with the ball crashing against the underside of the bar. The ball bounced down and then upwards and out of the goal area. Roger Hunt could possibly have knocked the ball into the net, but he turned away raising his hands in jubilation, convinced that the ball had crossed the line. The ball was then cleared for a corner without a ‘goal’ being given and the Swiss referee Gottfried Dienst ran over to consult the Soviet linesman, Tofik Bakhramov who awarded the goal.

Pictured left and right: 1966 Carvosso World Cup posters – 2 original 1966 World Cup posters produced by Carvosso, printed by McCorquodale & Co. ltd, a rare one with dates and detailing the venues and the other with World Cup Willie mascot and dates. Sold for £432 at Bonhams, Chester, 2011.

This goal is still argued about today and film evidence of the match is totally inconclusive. However, in the last minute, the match was finally settled when England’s captain Bobby Moore, found Geoff Hurst in the centre circle with a long pass. Hurst then set off on one of his long runs and with the immortal words of match commentator Kenneth Wolstenholme ‘and there are some people on the pitch. They think it’s all over…. it is now!” ringing in the nations ears, Hurst smashed the ball into the net for his side’s fourth goal and his hat-trick.

With England winning the World Cup there was a lot of merchandise made and a lot purchased, so the majority of items are not extremely rare. The article features a selection of items sold at auction. Ebay often has many World Cup Willie items but be careful as not all are vintage 1966.