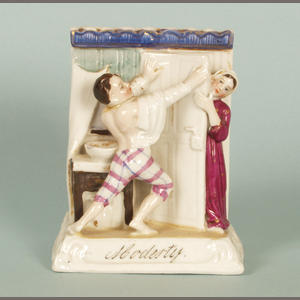 The term Fairing  can be designated to anything obtained at a Fair, but the term has become exclusively attached to small porcelain figures &  figure groups, and sometimes trinket boxes, match strikers, pin holders and spill holders that were given away as prizes or sold at the local Fair. They were usually humorous and sometimes risque, and for the majority they had captions inscribed on their base.

Pride of place on the maid’s mantelpiece was often given to a colourful figure ornament known as a fairing – a treasured memento of a rare day at the local fair. Tony Curtis 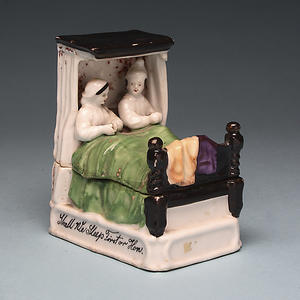 Pictured left: A Fairing pinbox titled Shall we sleep first or how? Sold for £41 at Bonhams, Honiton, 2006.

Fairings were very popular from 1860 to just after the death of Queen Victoria, and costing just a few pence they were popular amongst the working class who would value and collect the Fairings, as a reminder of the day at the fair. The  Fair during the mid 19th century was often an annual holiday for the local community. As the century progressed, the growth of the railways and transport networks led to increased mobility and the commercial importance of the Fair decreased. During the later part of the century Fairings were more likely to be sold in shops than be a prize at the Fair. 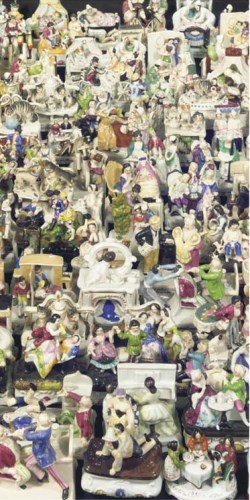 Pictured right: This large collection of Fairings was sold by Christies in Amsterdam in 2004. The collection included over 200 assorted Fairings, of which 22 were impressed with the Shield for the Conte & Boehme Factory, Pössneck, Germany. The Fairings wer sold for 14,938 EUROS.

Although seemingly quintessentially British the main production of Fairings was in Germany and in particular the Conta & Boehme 0f Possneck, Saxony. The German potteries were technologically advanced and were ale to produce the small brightly coloured, gilded Fairing pieces cheaply for the mass market. The Fairings were made of white soft-paste porcelain and would be assembled from several moulds, fired, glazed, fired a second time and subsequently had painted and gilded. Conta & Boehme made Fairings from about 1860 to 1914. Several other factories in the area also produced Fairings but generally to a lesser  quality, until the start of World War I ended the trade.

The subject matter for the Fairings was influenced by ideas from their British agents – many of the Fairings were based on courtship, marriage, everyday life, popular songs, characters and events from the period. The Fairings featured maidens, newly weds, drunks, couples and figures of fun. Some more serious Fairings were produced but the majority were light hearted and great fun. Towards the end of the time that Fairing were being created there was a shift towards more sentimental scenes.

With the great variation in Fairing models, their humour and their colourful appearance, Fairings are popular with collectors. Today Fairings can still be purchased relatively cheaply £20-£30 ($30-$50), but early Conta & Boehme studies, rare pieces and Fairings with unusual captions have the most value.