Wade and Disney are two of the hottest collectable names around – so a combination of both makes for something really special. In 1955, Walt Disney’s Film Lady and the Tramp was released and was a tremendous success, combining an appealing story, enchanting animation, and songs by Peggy Lee, one of the greatest singers of the era. It was no wonder that Wade approached Disney for permission to use the character designs for a new series of porcelain figurines.

In the Film Lady was given as a Christmas gift hidden in a hat box, and so each model was similarly packaged in a small, round, striped cardboard box. Naturally, the series was called ‘Hat Box’. The first four figurines were released in 1956 and retailed at 2/11d (30p) each.

This set, all from Lady and the Tramp, included the two title characters, plus Jock the scottie and Trusty the bloodhound. They were nicely modeled and painted, and stood around one and a half to two inches tall. In this
early set, Jock wasn’t wearing his familiar tartan coat, but later he was given a blue coat which was subsequently changed to green.

The characters proved popular and over the next few years more figurines from Lady and the Tramp appeared in the shops.

Eventually the set included Scamp the naughty puppy, as well as Peg, Dachie, Toughy and Bons, all dogs from the film. Also available were those two evil Siamese cats, Si and Am, Si in particular looking really sinister as he revealed his sharp feline toothypegs.

Characters from other films were produced too. Favourites such as Bambi and his Friends Thumper the bunny and Flower the skunk as well as Pegasus the little winged horse from  Fantasia and Dumbo the elephant with the over-large ears, all appeared as china figures in the Hat Box series.

In the early 1960s Wade introduced ten new figurines, and the price rose to 3/6d (33p). Because this last set had a short production run, many are now extremely rare, and some are commanding prices of a hundred pounds or so, which seems a lot of money for a two inch high figure. The characters included dogs from 101 Dalmatians – Rolly, Lucky and the Colonel – and also the cat, Sergeart Tibs.

But it is The Sword in the Stone set that contains the most highly-prized
figurines of all – Merlin the Wizard in his alter-egos of caterpillar,
turtle or hare, as well as Madam Mim the hen, Archimedes the owl, and
the Girl Squirrel. Just a couple of years later, the Wade Hat Box series
was discontinued. Merlin as a turtle is now the most wanted, and most difficult to obtain, Hat Box figurine. 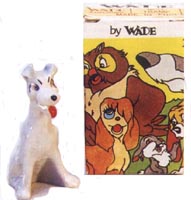 Tramp was also reissued, but this was a new version, seated instead of standing, and didn’t seem to capture the charisma and impudence of the original street-wise dog. Also the modeling on this new figure wasn’t as fine, and it was smaller, out of proportion with the others In the set. The original standing Tramp is now becoming quite scarce, because the long lanky legs are delicate and so are easily broken.

The other designs remained the same, apart from slight colour variations which are difficult to distinguish unless you can compare both versions side by side. For instances Peg’s fringe was beige in the new model and yellow in the original, while Scamp’s ears were now pink inside instead of mauve. Thumper’s flower changed from dark to light orange,
Bambi’s eyes from dark to light brown and Jock’s mouth from purple to
pink.

Wade also released four models from The Fox and the Hound. These were Big Mama the owl, Tod the fox, and Copper and Chief, two of the dogs. Some of these models came in small round boxes made from plastic. The others were in cardboard boxes brightly decorated with Disney characters. Now the series was just referred to as ‘Disneys’. Today, prices very greatly for Hat Box and Disneys figurines, but the more common ones such as Lady, Peg or Bambi are around £15-£20.

As a follow-on from the first Hat Box series, Wade produced a series of extra large Disney characters, similar to the smaller models’ except for Jock, who was standing instead of sitting, and Lady and Tramp who now both sat. These models were around five inches tall, and became known as ‘Blow-ups’ amongst collectors. They’re very collectable, some of them changing hands for two hundred pounds or more.