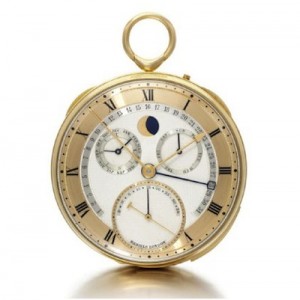 Sotheby’s announced the Single Owner sale of the George Daniels’ Horological Collection, which will take place in London on 6th November 2012.

George Daniels (19 August 1926 – 21 October 2011) was a world-known horologist and the most important of the 20th Century. He was the only watchmaker ever to have received a CBE and a MBE for his services to horology, and was the inventor of the Daniels revolutionary ‘Co-Axial’ escapement developed during the 1970s, designed to run unaffected by the deterioration of its lubricant. This personal collection of clocks and watches comprises those pieces he made and retained for his own pleasure and fine and rare examples by some of the most famous makers of the 17th, 18th and 19th Centuries. Consisting of approximately 130 lots, and estimated to fetch in the region of £5 million, the sale will be a tribute to a life devoted to horology. Many of these special pieces have been unseen in public for many years. All proceeds from the sale of the collection will go to help the George Daniels Educational Trust.

Commenting on the sale, Geoffroy Ader, European Head of Watches said: “It is a huge honor to present George Daniels’ personal collection featuring watches and clocks of key periods of horology history. George Daniels was a Master watchmaker and this single owner sale is a unique opportunity to celebrate his extraordinary contribution to watchmaking. We look forward to sharing our enthusiasm with many collectors around the world”.

Jonathan Hills, Deputy Director, Sotheby’s Clock Department, added: “This auction represents a one-time opportunity for collectors to acquire the clocks George Daniels collected to satisfy his lifelong fascination with horology and which no doubt brought him great enjoyment. We are delighted to have been entrusted with the sale of this important group”.

George Daniels
From very humble beginnings, George Daniels was fascinated by the movement of a broken pocket watch and resolved to learn how to repair it. He established himself in South London as a trade watch repairer developing a system of repair that enabled him to mend and return watches faster than others. By 1960 he had become reknowned for the quality of his repair work and ability to work on watches of great complexity. He made his first and only marine chronometer which was to be followed, over the next forty years by approximately 30 hand-made watches.