Halcyon Days have created some very special pieces including baubles and a music box.

Bairstow Pottery have released a special Platinum Anniversary Queen Elizabeth II Toby Jug. The edition is being released in five colourways: Dark Blue, Green, Grey, Light Blue and Pink. Each colour being one of the Queen’s favourites. Each jug is hand painted and features embellishment completed by using real platinum. The edition has been modelled by Bairstow Pottery’s lead designer Ray Noble.

The Steiff Platinum Jubilee Bear is available exclusively from The Danbury Mint. The teddy is being produced until the 2nd June 2023 – the 70th anniversary of Her Majesty’s Coronation. She is being made in a caramel and cream coloured mohair is fully jointed and will measure approximately 10½” (26cm) standing. As a Steiff bear she has the classic Steiff ‘button’ and white tag with red writing attached  to her ear and also wears a purple bow and a medal featuring a picture of The Queen saying 70 Golden Years. Her paws are finished with the Queen’s cypher and the dates of her reign. A lovely bear priced at £249 which can be pre-ordered for delivery in August.

The Royal Mint is creating several different sets including a new 50p and a £5 Crown designed by John Bergdahl. The commemorative Platinum Jubilee portrait depicts Her Majesty on horseback and two beautifully decorative reverse designs for the occasion. The collection also includes the first UK 50p coin issued by The Royal Mint to celebrate a royal event, which features a bold, graphical celebration of The Queen’s reign by the design agency Osborne Ross on the reverse. The obverse features the Platinum Jubilee portrait. 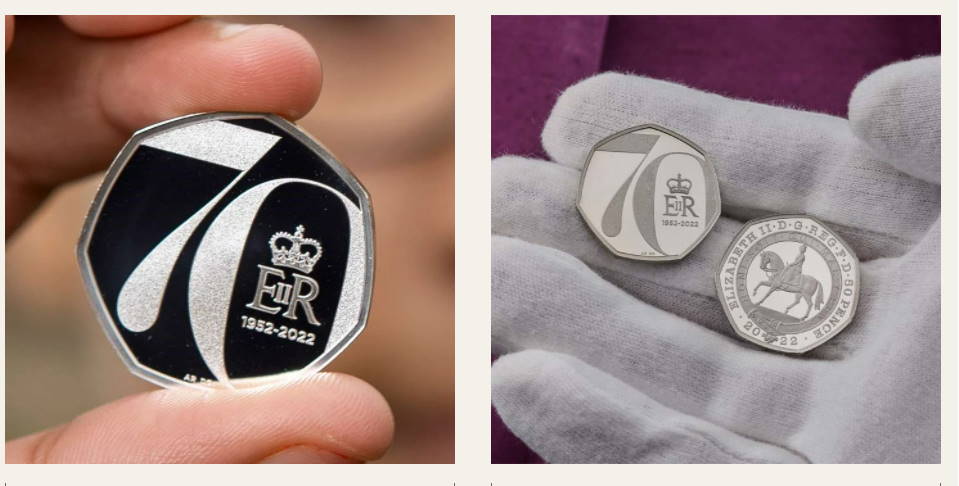 The Royal Collection is one of the largest and most widely distributed art collections in the world. Running to more than a million objects, it is a unique and valuable record of the personal tastes of kings and queens over the past 500 years. In addition to the well-known paintings, drawings and other works of art, the Collection includes almost the entire contents of all the royal palaces.

The Royal Collection create items and collectables for sale online and the shops such as Windsor Castle, Holyrood Palace, and The Garden Shop at Buckingham Palace. A number of Platinum Jubilee collectables and gifts are available including plates, tea sets, crystal, clocks, pill boxes etc.