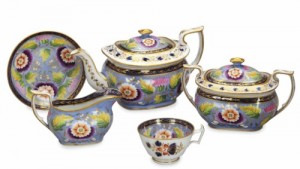 No porcelain has been more misunderstood than that made at the New Hall factory at Shelton. It is by no means scarce, but very obvious specimens of it (on the present knowledge of its characteristics) are still sometimes ” identified ” as Lowestoft, Torksey, Wirksworth, ” cottage Bristol,” or conveniently as one of the several porcelains whose existence in notable quantities is open to doubt. Alternatively, such a porce lain as that which was made by Miles Mason, when unmarked, is often called ” New Hall,” with some excuse so far as the later ” bone paste ” of the latter factory is concerned. Just as Liverpool was once the repository, as it were, of doubtful mid eighteenth century pieces, so is New Hall, all too often, of similarly puzzling ones of the early nineteenth.

The beginnings of true New Hall porcelain were prompted by the early nineteenth century policy of the Staffordshire industry of supplying to working folk the kind of ware which had formerly been made only for the wealthy and the middle classes. The Potteries had always concentrated on the making of fine earthenware, the only eighteenth century porcelain maker of note being Littler of Longton Hall. So when Champion’s patent for making hard paste ” was apparently purchased in 1781 by a company of five Staffordshire potters, something quite new was set afoot.

Available evidence seems to show that production was first at Tunstall, but that a year later, owing to dispute between the partners, a move was made to the Shelton works of Hollins, War burton, & Co. The next important date is about 1801, when John Daniel joined the company. It was soon after then that the making of ” bone china,” the standard ware of the Potteries, began.

It is impossible to set hard and fast dates for a sudden change over from the old Bristol paste to the new (both 1810 and 1812 have been suggested) and it is more reasonable, and probably more accurate, to suppose that both were made side by side until about 1815, after which year the bone paste only was used until the closure between 1825 and about 1830. Certainly there is reference in an 1812 catalogue to ” real china.”

How can this ” real china ” be identified? Despite the fact that Champion’s patent had been bought the New Hall ware made under it is not of such good quality as fine Bristol, being more like the ” export ” Chinese as typified by “Chinese Lowestoft.” There is a similar greyness in the New Hall paste, though less pronounced, and it is seldom disfigured by the ” pits ” and firecracks that so often detract from the Oriental. Whereas the thin Chinese glaze is commonly minutely pitted, that of the English factory is uniformly thin and clear, though often ” bubbled ” inside the foot rim.

Apart from the body, consideration of the decoration is usually sufficient to suggest Chinese or New Hall provenance. That upon the former, though inferior to that upon the ware intended for home use, is nevertheless marked by fine, detailed brushwork, whereas the English decoration consists for the most part of simplified, conventional, almost careless patterns.

Much Chinese ” export ” ware, in deference to Western preference, carries decoration in which details are picked out in gold, but this was sparingly used at New Hall, being reserved for compara tively few patterns. Finally, much New Hall ” hard paste ” porcelain can be identified by the presence of a mark, a painted pattern number in black, brown, orange, pink, or green, sometimes pre ceded by a script capital N or the letters ” No.”

Naturally enough, at first at any rate, many Bristol shapes and patterns were retained; but as time went on, in keeping with quantity produc tion, a limited range of both was decided upon, notably as regards the tea wares which appar ently comprised al most the whole output. Let us first consider the tea pots, of which four shapes are well known.

(2) Waisted, elliptical section, ordi nary ovalsectioned spout, convex lid with flattened top, solid knob, and wide flange projecting beyond the rim, and with a steamhole at one end.

(3) Vertical sides to a plain oval section, same spout as No. 2, and the same lid fitting flush inside the rim, but with the steamhole in front, midway be tween knob and rim.

(4) Boatshaped body, rim flar ing high and wide and blending into the upper handle terminal, with the same lid as Nos. 2 and 3.

It was the usual practice to provide each teapot with a stand, shaped to fit the section.

The cream jugs correspond in shape to the pots, but two additional shapes are known. One is very common indeed, and was one of the inherited Bristol models, shaped like a helmet, and not to be confused with a similar Lowestoft form, and the other is shaped like an inverted truncated cone with a waisted neck, wide flaring lip, and thick, solid base. It should be noted that the jugs belonging to the lobed teapots often have downward tapering, instead of vertical sides.

Pictured right: A New Hall Large Bowl, Circa 1790, The interior painted with trailing iron-red peony and pink chrysanthemum beneath a pendant berry border and gilt line rim, the exterior with four flower-sprays and scattered foliage, spreading star cracks to base, slight chip to footrim and rubbing to enamels and gilt rim.  Sold for $1,375 at Christies, London, June 2008. Image Copyright Christies.

Generally speaking, decoration followed on the same lines throughout the life of the factory, always with emphasis on sim plicity. Apparently there was little attempt at novelty, although a patent was taken out in 1810 by Peter Warburton for printed decoration in gold, in a style somewhat reminiscent of Spode work. This lone experiment in transfer printing (for it is surpris¬ing that greater use was not made of a process which has always offered such a quick, easy aid to cheap production) resulted in some attractive engravings of scenery and rustic life in purple as well as in gold, which on the later New Hall were often washed over with rather crude enamels.

The peasant characteristic of the porcelain is best exemplified in the floral patterns, which are composed of conventional flowers with none of that attempt at verisimilitude which marked the work of artists in practically every other contemporary factory. The central motif of such a pattern is commonly a bunch or bouquet built up around a characteristic pair of backtoback, globular ” roses,” one red and the other puce. The rest of the decoration consists of small sprigs of blossoms, most of which are imaginary, but some of which can reasonably be identified as chrysanthemums, daisies, and pimpernels. Red, puce, and green predominate in all the floral patterns. Very occasionally we find pieces decorated with bouquets in which roses, for example, are painted more care fully, petal by petal, and which show some attempt at careful composition. Even in these rare instances, though, the result is far from naturalistic.

A basket of flowers, again accompanied by the typical scat tered sprigs, is a common New Hall motif. The basket itself is wide and shallow, like a tub, with its wickerwork in red, represented by horizontal and vertical lines, and containing the same kind of stereotyped blossoms. Chinese figure subjects in the form of garden or domestic scenes fall into two classes. The simplest ones have no diaper ornament, and there is great variation in the quality of the brushwork.

Sometimes there is an evident attempt to represent the folds of garments by careful shading, or to attain some sort of anatomical accuracy in faces and limbs, but the Long Elizas ” on other pieces are mere shapeless caricatures of those seen upon, for instance, early Worcester and the finest Liverpool. The best known, per haps, of these elementary patterns was copied from a Bristol original, and features a woman and a boy in a garden, the former holding an umbrella, and the latter a flower and a toy windmill.

The better sort of New Hall Chinese figure decoration is reminiscent of a wellknown Worcester style, although more crowded and less carefully drawn. In the case of a saucer the subject is enclosed within a wide border of pink net diaper interrupted by small scrolled reserves containing alternate sprigs and sketchy land scapes. On teapots the fact that the border is painted not only on the lid and shoulder but also around the handle and spout means that the decoration com pletely covers the piece. It is this kind of ware which may be easily confused with the Mason bone china of between 1815 and 1820, which it closely resembles, unless the latter happens to bear either the mark of MASON impressed or an enamelled imitation Chinese seal mark.

Though these classes of decora tion are those which are most typical of the Staffordshire fac tory, mention must be made also of an occasional richer, more colourful pattern in the ” Japan ” style, usually floral in conception, in an exotic kind of way, painted in dark blue and red, and richly gilded. There were also some revivals of the Sevres styles towards the end of the ” hard paste ” period, and very rarely indeed we see the uncharacteristic use of bands of ground colour enlivened by boldly painted flowers and foliage.

One of the features of much early Worcester, Lowestoft, Bow, and Liverpool porcelain is the common occurrence of simple border patterns, and it is some¬thing of an anachronism to find something similar on New Hall porcelain which is so much later in date. The more complicated diaper one has been described, but in addition we find single or double unbroken lines intersecting a wavy one which is sometimes dotted, single lines intersected by a wavy pink or mauve ribbon, with small sprigs in the bays, and lines of zigzags, arrowheads, or small arcs. These borders were painted in the usual palette of red, pink, mauve, puce, and green, with the rare use of an opaque palish blue.

Chinese ” export ” porcelain of the cheaper kind was the inspira¬tion for typical New Hall patterns carried out entirely in black, enriched with slight gilding. Yet another useful aid to identification is the presence on handles and spouts of an ” open fan ” motif accompanied by a line of dots, in dark purply red, blue, or black enamel, which same distinctive colours were used to decorate the knobs of teapot lids with naturally flowing brushstrokes.