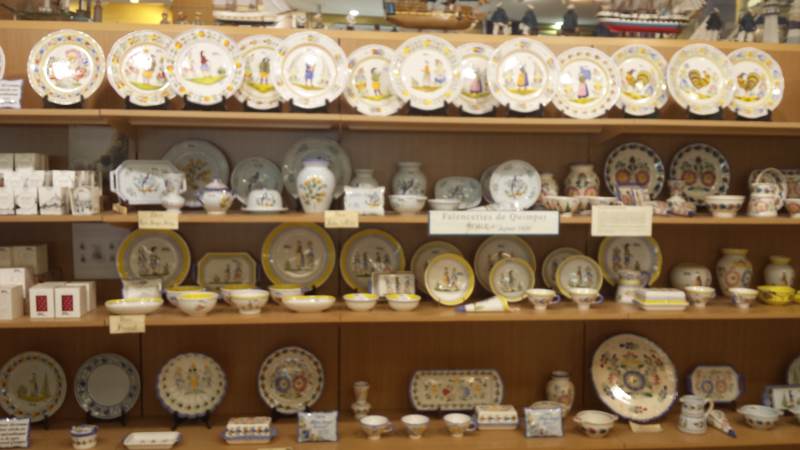 On a recent trip to Brittany and the magnificent Mont St Michel I came across a wonderful display of modern Quimper Faience Pottery and notably Henriot Quimper. Many of the designs and colours were instantly recognisable and based on the traditional The Petite Breton  pattern, but there were also many new modern and very attractive patterns.

The handpainted French faience known as Quimper Pottery (pronounced “cam-pair”) was founded by potter Jean Baptiste Bousquet and has been manufactured in Quimper, Brittany, France since 1690. The Locmaria area of Qimper had an abundance of clay, a navigable river and skilled labour and was to be an ideal place for Jean Baptiste Bousquetto build his kilns. The firm was known as HB Quimper.

In 1772, a rival firm was founded by Francoise Eloury known as Porquier. A third firm formed in 1778 by Guillaume Dumaine which was known as HR or Henriot Quimper. The pottery made by the three companies was similar featuring the Breton peasants and sea and flower motifs. In 1913, Porquier and Henriot merged with HB joining the others in 1968. The company was sold to a US family in 1984. More changes followed and in 2011 Jean Pierre Le Goff purchased the company and changed the name to Henriot.

Henriot Quimper continues the tradition producing the traditional patterns featuring the Breton figures as well as many new more modern designs. The superbly talented resident artists at Henriot still hand-craft every piece of Quimper Pottery. Historically, the Quimper factories hosted artists in their studios which continues to this day. Quimper pieces are still produced from casts and works by major artists who have created works for the various Quimper factories, including Berthe Savigny, Louis Henri Nicot, R. Michaeu Vernez, Rene Quillivic, Beau & Porquier & George Robin. In addition, contemporary artists, such as Paul Moal and Loic Bodin continue to work with Henriot.