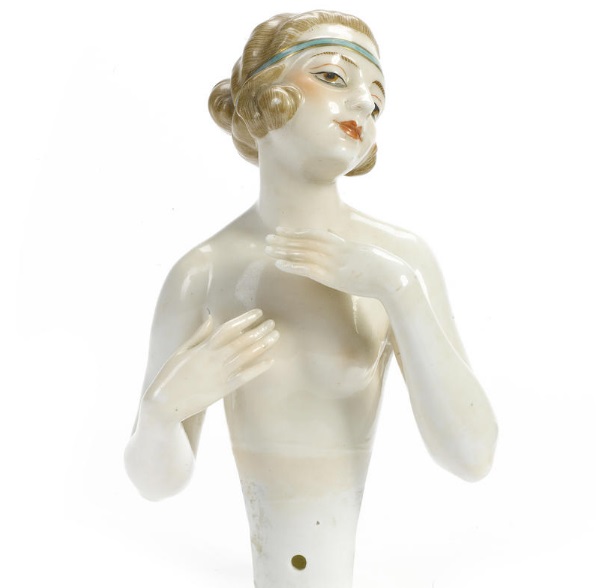 They have a variety of names – pincushion dolls, tea-cosie dolls and dresser dolls… and there are those also known as ‘tops’, ‘pin heads’ or ‘whisk-broom’ dolls. Generally they are referred to as Half Dolls… but whatever name may be dubbed, they all have one thing in common.

They are all dainty, waist length finely sculptured figurines which were made by the thousand notably in Germany, and were designed to disguise or decorate a variety of household objects.

The variety made was enormous. Pretty ladies were the most popular… who were delicately arranged in alluring poses and from the waist up either dressed in high fashion, in scanty fripperies or not at all! Put to the use they were designed for, they were attached to voluminous skirts which covered all manner of things from powder boxes to teacosy or they just stood around for decoration. To a limited extent children wearing Dutch bonnets and angelic or cheeky expressions were attached to such things as boudoir cushions, pin cushions or clothes brushes – and to an even lesser extent men appeared in the guise of colonial gentlemen or soldiers to conceal anything obtrusive to the eye, as did an assortment of fine porcelain animals such as rabbits, cats, dogs and birds which decorated powder puffs or became stoppers for bottles.

Some of the most beautiful porcelain Half Dolls with their famous tapered waists were made by Dressel & Kister in Passau. Artists sued portraits or engravings for their subjects – or based them from imagination on legends or on characters from the classical theatre. The skill in making the dolls with delicately scuIptured arms was faultless even the minute lines on the palm where dolls had open hands with gracefully spread fingers. The easiest dolls for the artist were made in two-piece moulds with their arms and hands close to their bodies which after removal were smoothed at the seams, then glazed and fired at a high temperature before being decorated and refired at a lower temperature to set the overglaze.

More complicated were the dolls with arms held away from the body with one hand on the hip or touching the hair, with the other hand holding an object close to the body. This took the artist considerable time in anchoring arms, hands and fingers by various ingenious methods whilst still endeavoring to preserve their delicately graceful pose. More difficult were the dolls with the arms held away from the body which called for great skill in the modelling. These intricate figures involved using many separate moulds and the fragile parts would then be fastened onto the unfired figure in a semi-moist state using slip as an adhesive. One can easily understand, therefore, why the best quality Half Dolls in poses with arms held away from the body with tiny separated fingers are in the top bracket as far as prices are concerned.

Half Dolls were very popular between 1900-1920. They were purely adult extravagances for the dressing table or for keeping the teapot warm. Those produced in the early part of the 20th century were styled somewhat similar to the 18th century Meissen dolls with elegant hairstyles and ornate clothes if indeed they wore any! Then in the twenties the flapper models came in and with the market now flooded there also emerged the cheap, poorly moulded and badly glazed crinoline ladies the public craved for to adorn practically anything that needed to be covered up. Many of these were sold cheaply in haberdashers and novelty shops for people to assemble at home – and many would be supplied by manufacturers to outworkers who finished them for retail outlets.

Unfortunately it’s not always easy to determine the source of manufacture or to be able to date Half Dolls from the ma rks. For one thing Dressel and Kister bought moulds from other factories with the right to use their trademarks and this was additional to selling direct to retail outlets and other companies for assembling their own novelties. Then there was the Herend factory in Hungary which not only imitated the work of other factories but also built a reputation on being able to reproduce designs and replace pieces when the original manufacturers had gone out of business. So there were many porcelain factories reproducing other manufacturers models – often quite legitimately. There was further confusion when craftsmen made a hurried trademark on a finished piece which resulted in a modified manufacturers symbol! Another theory for the lack of marks was that sometimes workmen didn’t attach enough importance to the dolIs to bother or they would simply stick on a small label which obviously disappeared in the course of time.

Marks, if any, will be on the tapered base of the doll or inside the small opening on the lower unglazed section. Look for the Goebel, Heubach and Dressel and Kister Half Dolls who made some exquisite dolls as did Capo-di-Monte in Italy. There were also many other manufacturers making equally fine dolls on the Continent, in America, in the UK and of course later in Japan.

One of the most sought after Half Dolls is a waitress in a Vienna chocolate shop holding a chocolate pot and a cup and saucer on a tray. It was produced by the Goebel porcelain factory for advertising Walter Baker chocolate and in 1975 it fetched the highest price ever known for a porcelain half figure. Rare Half Dolls such as this one, particularly those of a very fine quality are now commanding high prices. They once had a place in almost every covering, hiding or decorating something useful in the home. Many were purely for frivolous amusement – and now they are interesting collectables. And from a practical viewpoint several of these little treasures take up very little room … at the same time as being interestingly attractive.